6/2/2014 - The Decision was released in February awarding a shared custody decision and joint decision making between the Family and her Biological Father giving primary care to the Family.  The Decision, a very dangerous one to all fathers, is being appealed to the Colorado Supreme court. Mean while Rob and his family are trying very hard to share custody of Kaia and see her as much as possible.  The visit are always challenged by the family but Rob and family still push to see her.

10/24/2013 – Time to fight to bring Kaia home to her Daddy. Full Contested hearing scheduled for December 10th, 11th, and 13th. We are prepared to bring all constitutional remedies. Baby Girl deserves to be with her Daddy... Gonna bring you home this time.

The Book is being written and in the works.

5/1/2013 – A great day… Colorado has jurisdiction as Utah fillay released it.  Colorado made orders for phone calls with Kaia and visit coming on May 17th. I can hardly wait to see my little love bug…

4/7/2013 – A new order from Colorado came in last week to get Utah to release Jurisdiction to Colorado.  Colorado should have never lost Jurisdiction.   Court hearing on Friday to get a hold of Jurisdiction from Utah.

3/30/2013 - Things get more complicated as I miss my daughter more and more and time goes by that the family has not allowed me to see her or HER to see me. An offer to see her with three days to get to Utah made it nearly impossible to do.  Is the family getting the point that I am not going away and my daughter have a CONSTITUTIONAL right to bond and be together?

1/18/2013 - The drama continues as the PAPs have decided to take away my visits.  It appears we will be in court next week.  They are going against the MOU that we all signed.

1/1/2013 – Happy New Year!!! What a great feeling it is to start to really get to know my daughter and spend quality time with her. She is adorable and everything I could have ever imagined. We will be on to the next steps in the reunification therapy and possible custody hearing in January.

10/05/2012 – Oh how sweet!  Everything is going as planed and working out.  This next couple of months will be so exciting.  Time to spend some time with my daughter.  I am counting down the days.

10/04/2012 – Everything could be coming to an end and Kaia and I will be reunited!!! Stay tuned as the final things are ironed out.

﻿9/1/2012 – Finally September! Only 12 more days and I get to see my daughter.  Counting down the days and hours.  Therapist was to tell her I am her daddy in July. Hopefully I can hug my daughter and tell her how much I love her with her knowing I am her real daddy...

This means there will not be a hearing to terminate my rights!

6/10/2012 - New Attorney Mike Cheroutes is on board fully. 20 + years in international custody fights.  Time to get agressive and get my Daughter returned to me.  I miss my baby girl so much. New strategy with Utah Attorney!  Feel so much beter about the future as we get my Daughter home.

4/22/2012 - A big win for the Wyatt's.  They now can hold Attorneys responsible for damages for the illegal adoption of our children.  http://www.sltrib.com/sltrib/mobile/53956775-68/adoption-court-virginia-wyatt.html.csp#.T5MYBKu8qlo.facebook

This is huge for my case and all Fathers fighting the unlawful laws in Utah. 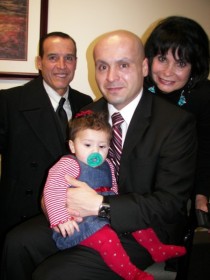 My story is so different from many of the other fathers out there because I did everything right and in accordance with Utah and Colorado Law. I will tell you the long version of my story of my fight for my daughter.

Carie Terry, now married as (Carie Morelock), of Denver Colorado and I were dating and living together when we found out we were pregnant. The moment we went to our first Doctors appointment she began acting strange. We were 12 weeks pregnant, still involved in a relationship, living together when she began talking about Adoption. I made it clear from day one that I would never consent to the adoption of my child. She came home one Sunday afternoon after her Mormon Church service and said she had spoken to her Bishop and he told her, "she needed to adopt our baby to a Mormon Family that could provide for our child better." I said again I would never consent to an adoption and that I would do what ever it took to keep my child from being adopted.

We separated about a week later.  I started paying her child support during her pregnancy to help her with Doctor bills and expenses associated with having our child. It was found in District Court of Utah I paid over $2,500 in child support during her pregnancy. I hired Attorney Ms. Emily Berkeley of Elkus and Sisson, http: //www.elkusandsisson.com/﻿.  Ms. Berkeley wrote a letter to the LDS adoption service that Carie was speaking too, to stop all proceedings dealing the adoption of my child by Carie Terry. I often emailed Carie to find out how the baby was doing to get status reports but she never gave me much information. She finally emailed me back that she would be traveling to Utah to visit her ill father. She would come back to Colorado to finish work and then she would re-discuss the adoption of our child. I then had my Attorney file for Paternity Action in Colorado and an Injunction to Adoption on January 13th, 2008.

The Colorado Paternity Action was filed in the Denver District Court on Jan. 13th, 2008.  Carie responded to the action with specific statements that NO she would not go to Utah and adopt our child. A hearing was set for Feb. 20th, 2008 in District Court of Denver.  On that same morning she called the court in Denver CO and stated that she was in Utah visiting her ill father and asked for the hearing to be continued. Unknown to us she was at the Utah District Court filling for the adoption of our daughter to her Brother and Sister in-law which happened on the same day, February 20th, 2008, 15 minutes after she called the District Court of Colorado. I had no idea our daughter had been born five weeks prematurely 2 days earlier and was alone in a prenatal care unite in Sandy Utah. On Feb. 25th Carie shows up to work without the baby. I was contacted from the Owner of the Health Club she worked at that there is no baby with Carie.  I rushed to every hospital in Denver to try and find my daughter knowing she was premature and alone. My Attorney droped her case load and waited in the Judges office to get an immediate hearing.  We were granted a hearing in Colorado on Feb. 26th.

During the hearing we find out lie after lie and finally the Colorado Court conferenced with the Utah Justice to gain an understanding of what had happened. The Colorado Court determined to keep the case open and ruled I am the father and that my name shall be put on our daughters birth certificate.  I hired Mr. Dale Dorius and Ms. Jennifer Reyes is my Attorney of record in Utah. What a blessing to have such an amazing Attorney! We filed for Dismissal of the Adoption and asked for immediate custody of my daughter. We did not get our hearing until six months later. At the initial hearing the Judge, Judge Faust, dismissed the adoption and asked the family to return my daughter to me in four days. Larry Jenkins the Mothers and Families Attorney appealed the decision. The judge ended up three days later vacating his decision and asked for an evidential hearing. From here there is about five more hearings all of which have prolonged the processes. Finally the Mothers consent to the adoption was vacated.  The ruling was Appealed and denied to be heard in the Utah Court of Appeals.

The vacation of the mothers consent to the Adoption should have stopped the adoption but it only prolonged the case. The final District Court decision allowed my daughter to be adopted and terminated my consent until I Appealed the Decision.

At one hearing, December 18th, 2009, before the preliminary termination of my rights my daughter was ordered to court where I met her for the first time for an hour. The happiest day of my life!!!

The Appeal is now where the case is at. It has been almost a year sine we went to the Utah Supreme Court on the Appeal. If you listen to the Appeal on the Utah Supreme Court web site you can here the Justice's frustration with the Attorney and family. Please listen to it at: http://www.utcourts.gov/courts/sup/streams/index.cgi?mon=201011, in Re: Baby B. In my case the Supreme Court did ask for supplemental briefs in regards to the PKPA (Parent Kidnapping Prevention Act) and I have attached that in the legal tab.

Thank you for caring about what I am so desperately fighting for. I love my daughter unconditionally and besides my son she is my world and deserves to be with me, her biological daddy. I have given up so much to fight for her. I am $175K into this fight in legal fees and trips to Utah but no amount of money can make up for the fact she deserves her daddy in her life.